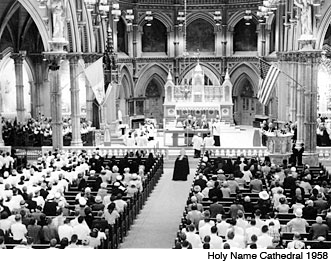 In the beginning Holy Name was not a cathedral church. The history of Holy Name Cathedral Parish is as much the story of Catholic immigrants and their new city, Chicago, as it is the story of bishops and seminaries. The Chicago Fire, the Chicago Subway, and most importantly, the dynamic changes within the city’s population and the Church itself, all left their mark on the Holy Name community.

For a capsule history of Holy Name Cathedral Parish, click the following dates:
1843-1871 A Parish is formed and grows in a new city
1871-1904 Fire and Rebuilding:  Holy Name Parish builds a Cathedral
1904-1939 Early 20th Century: Service and Growth in the Metropolis
1939-1978 Expansion and Modernization
1979-2007 Reaching towards the Future
2008-Present Facing New Challenges

Sept. 30, 1843
Diocese of Chicago, including all of Illinois, is created by the Vatican. Bishop William Quarter and his brother, Rev. Walter Quarter, are assigned to the diocese, headquartered at St. Mary’s.

Oct. 5, 1845
Cathedral of St. Mary is consecrated by Bishop Quarter. St. Mary’s, at the southwest corner of Madison and Wabash, remained Chicago’s official Cathedral until after the Chicago Fire.

Nov. 18, 1849
A freestanding Chapel of the Holy Name is dedicated on the southwest corner of the university grounds.

1851
An immense brick church is built on State Street between Huron and Superior, just south of the present Cathedral. The cornerstone of the Church of the Holy Name was set in 1852. Steeple: 245 feet high. Cost: $100,000.

Dec. 25, 1854
Pastor Patrick J. McLaughlin celebrates the first Mass in the new Church; because of its size, this structure functions as the Chicago Diocese’s cathedral until it is destroyed in the Chicago Fire.

1861
Ten members of the Daughters of Charity of St. Vincent DePaul move into Holy Name Parish, first as teachers in the parish schools, eventually establishing a “foundlings’ home.” St. Vincent’s Asylum is opened in 1881 at the southeast corner of LaSalle and Superior streets. Today, the former orphanage, a few blocks west of the Cathedral, houses offices for many of the services supported by Catholic Charities of Chicago, as well as the St. Vincent DePaul Center.

October 1871
In October 1871, Holy Name and St. Mary’s are destroyed in the Great Chicago Fire. Holy Name Pastor and Rector, Fr. John McMullen, finds all the parish buildings in flames upon his return to the campus from elsewhere in the city. He retrieves the Blessed Sacrament; all else is lost. Later that month, he visits New York and New England, seeking donations to help rebuild Holy Name and give relief to Chicago’s fire victims.

1874
Brooklyn Architect Patrick Charles Keely begins design work on the new Holy Name Cathedral. (Keely is credited with designing some 600 U.S. churches, including 16 cathedrals, in the latter part of the 19th century as the U.S. Catholic population grew and dioceses multiplied.) The cornerstone is laid on July 19, 1874.

Nov. 21, 1875
The new Cathedral of the Holy Name is dedicated by Bishop Foley.

1880
Chicago is elevated to archdiocese status; Nashville Bishop Patrick Feehan, who oversaw a post-Civil War building boom in Tennessee, is named Chicago’s first archbishop. In 1881, Fr. McMullen, who had served as Chicago diocese administrator, is consecrated bishop and appointed to the newly created Davenport diocese.

1888
The first of several Cathedral renovations begins. The quick, post-fire construction has left Chicago with a cathedral literally “sagging” on its Superior Street side.

1904
The Sisters of Charity of the Blessed Virgin Mary, of Dubuque, Iowa, arrive at Holy Name, continuously serving in all the parish schools, elementary and high school, for decades. Their service continued after the closing of Cathedral High School in the early 1990’s. Some 14 sisters, most of them “BVMs,” currently reside in the freestanding convent at 750 N. Wabash Ave.

They serve the parish and the larger archdiocesan community in a variety of ministries, running the busy front desk at the Rectory, tutoring inmates at the Metropolitan Correctional Center, as well as serving as ushers, ministers of communion and lectors at Cathedral liturgies.

Spring 1915
The Cathedral and its sanctuary are 15 feet longer, thanks to the perseverance of Archbishop Quigley and Rector and Pastor, Rev. Michael Fitzsimmons, who saw the need for a larger sanctuary to accommodate the ceremonial liturgies hosted by the Cathedral Parish. After much searching, they found a contractor to separate the sanctuary and nave, moving the sanctuary 15 feet east, much as frame houses sometimes were moved to new locations.

The scaffolding already had been removed when Archbishop Quigley died; his requiem was the first major liturgy celebrated in the “new” Cathedral.

1924
Archbishop Mundelein is given the “red hat” of a cardinal; a procession of 80,000 greets him on his return to Chicago.

June 1926
Holy Name Cathedral Parish hosts the International Eucharistic Congress. During the Congress, 1 million people venerate the Blessed Sacrament at Holy Name, the largest liturgical celebration in any American church up to that time.

1929
At the request of Cardinal Mundelein, the Little Sisters of the Holy Family establish a convent adjacent to the new rectory, which houses 18 priests, some on staff, others residents.

Founded in 1880, the Holy Family sisters are dedicated to serving the household needs of colleges, seminaries, episcopal buildings and religious communities of priests. These sisters continue to serve Holy Name today, helping maintain vestments, serving in the sacristry, and handling household and kitchen chores.

October 1939
George Cardinal Mundelein dies unexpectedly in his sleep. To accommodate the Cardinal’s funeral, the city of Chicago hastily re-paves State Street, where the subway had been under construction. More than 1 million people pay their respects as the Cardinal lies in state in the nave of the Cathedral.

1949
The parish celebrates its Centennial as a parish and the Diamond Jubilee of the Cathedral church.

1958 – 1965
Albert Cardinal Meyer serves as prelate of Chicago; his scholarship and leadership are recognized during Vatican II.

Easter 1968 – Christmas 1969
During Cardinal Cody’s tenure, the Cathedral is renovated to reflect liturgical reforms introduced at Vatican II. The Rev. Timothy J. Lyne, rector and pastor of Cathedral Parish, oversees the ambitious project which keeps the church structure closed for one and a half years. During construction, daily masses are held in the school auditorium; Sunday masses are held at six different sites organized by Fr. Lyne. The Cathedral re-opens for Midnight Mass on Christmas Eve, 1969.

1981
The Sanctuary Organ, handmade by Casavant Freres, is installed to the right of the altar. With 1,284 pipes, it is built in the 17th-century French style, a distinguished period in organ history.

1989
The Gallery Organ, handmade in the workshops of Flentrop Orgelbouw in Holland, is installed. With 5,558 pipes, it is easily the largest mechanical-action organ in the Chicago area.

November 1996
Not since the visitation and funeral of George Cardinal Mundelein had so many visitors come to mourn a Chicago prelate. Crowds snake around the Cathedral campus and Chicago Avenue, some waiting in line for hours to pay their respects to Joseph Cardinal Bernardin, archbishop of Chicago for 14 years, who died Nov. 14.

May 7, 1997
Portland Bishop Francis George, OMI, is installed as archbishop of Chicago. The following April, he travels to Rome to receive the cardinal’s red hat from John Paul II.

January, 2002
Father Dan Mayall is appointed as the 16th Pastor of Holy Name parish; the 9th Rector of the Cathedral

February, 2008
Holy Name Cathedral has a long and glorious history of providing sacraments and ministries to downtown residents, visitors and Catholics in the Archdiocese of Chicago. However, the latest chapter in the illustrious history may go down as one of the Cathedral’s most challenging periods. In just over a year, Holy Name endured two debilitating events that limited access and availability to the church while jeopardizing the safety of this iconic structure.

In February, 2008, a sizable piece of the ceiling broke off and fell to the church floor. Engineers determined a total structural repair of the ceiling was needed, as well as restoration to the 32 columns supporting the roof. The church was closed for seven months while workers meticulously restored and refitted every square foot of the ornate ceiling, and work continues in restoring the columns.

February, 2009
In the early morning of February 4, 2009, a fire was discovered in the church roof. The blaze destroyed much of the previous restoration and left the Cathedral with severe water damage.

In the wake of these two devastating events, the parish is left to deal with practical, spiritual and financial consequences. No one anticipated the partial roof collapse in 2008. No one could predict a fire just a year later.

According to structural engineers and firefighters, if the piece of the ceiling had not fallen and structural renovations were not undertaken in 2008, the water from the fire in 2009 would have been too heavy for the structure to accept and the roof would have collapsed. We were lucky to have found out about our roof when we did.

November, 2011
The new Bishop Timothy J. Lyne Rectory opened and now is the home for Cathedral residents and the Oblate Sisters. In addition, the rectory houses offices for parish staff. Every day and almost every evening, meetings and events are held at the rectory.