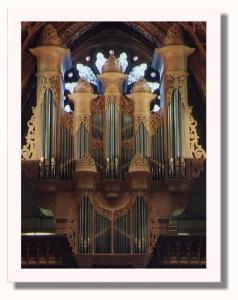 The Eucharistic liturgy is the pinnacle of Catholic worship and the central celebration of the cathedral parish and its visitors. Therefore Holy Name Cathedral places the highest emphasis on its liturgical ministry and its component musical element. Holy Name Cathedral, as the Mother Church of the Archdiocese of Chicago, serves as a paradigm of liturgical music for the Archdiocese of Chicago, the United States and the English speaking world.

The musical arts have a profound impact upon the Cathedral’s liturgical celebrations. A chamber orchestra accompanies the choir for the celebrations of Christmas and Easter as well as other solemn feast days such as All Souls Day (November 2).

The Schola Cantorum Cathedralis, a resident professional chorus, provides the ordinary and proper texts at the 9:30 A.M. and 11:00 A.M. Liturgies of the Eucharist on Sundays and on principal solemnities. The Schola Cantorum Cathedralis is the backbone of the Holy Name Cathedral music program. Their musicianship and dedication to the great choral tradition of the Roman Catholic Church are an inspiration to choirs and a source of beauty in the church’s liturgy.

The primary function of the Schola Cantorum Cathedralis is to lead worship, both musical and non-musical portions. The choral repertoire sung for cathedral liturgies is taken from the great choral literature of the Roman Catholic Church throughout the ages such as Palestrina, Lassus, Victoria and later great composers including Haydn, Handel, Mozart and Mendelssohn. In addition to music of the ages, 20th and 21st century sacred music by Britten, Part, Howells and others, and, the music of Richard Proulx are sung throughout the church year.

The Cathedral Singers are a highly trained volunteer choir who sing at 11:00 A.M. liturgies of the Eucharist on alternating Sundays. The singing ensemble sings a variety of sacred music from Thomas Tallis and Palestrina to Ralph Vaughan Williams and newly composed music for this ensemble.

The Cathedral’s Women’s Schola sings for liturgies of the Eucharist on alternating Saturdays at 5:15 P.M. This dedicated group of women sings sacred music of a special nature in a treble tessitura which includes the music of Bach, Leighton, Palestrina and Gabriel Faure. The Women’s Schola also sings for special liturgies such as the Liturgy for 50 years of Marriage celebrated by the Archdiocese of Chicago.

Two new additions to the cathedral music ministry are the Children’s Choir and the Cathedral Filipino Singers who grace liturgies at certain times in the liturgical year. The Cathedral Filipino Singers are directed by Vicente Velarde. The singing ensemble sings for the two Filipino Feasts of Santo Nino and Simbang Gabi as well as selected liturgies throughout the liturgical calendar.