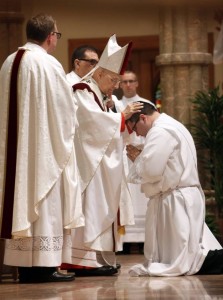 “Holy Orders is the sacrament through which the mission entrusted by Christ to his apostles continues to be exercised in the Church until the end of time: thus it is the sacrament of apostolic ministry. It includes three degrees: episcopate, presbyterate, and diaconate” (¶ 1536 Catechism of the Catholic Church).

“When Christ instituted the Twelve, ‘he constituted [them] in the form of a college or permanent assembly, at the head of which he placed Peter, chosen from among them.’ Just as ‘by the Lord’s institution, St. Peter and the rest of the apostles constitute a single apostolic college, so in like fashion the Roman Pontiff, Peter’s successor, and the bishops, the successors of the apostles, are related with and united to one another’” (¶ 880Catechism of the Catholic Church).

“The Lord made Simon alone, whom he named Peter, the ‘rock’ of his Church. He gave him the keys of his Church and instituted him shepherd of the whole flock. ‘The office of binding and loosing which was given to Peter was also assigned to the college of apostles united to its head.’ This pastoral office of Peter and the other apostles belongs to the Church’s very foundation and is continued by the bishops under the primacy of the Pope’” (¶ 881Catechism of the Catholic Church).

“In the ecclesial service of the ordained minister, it is Christ himself who is present to his Church as Head of his Body, Shepherd of his flock, high priest of the redemptive sacrifice, Teacher of Truth. This is what the Church means by saying that the priest, by virtue of the sacrament of Holy Orders, acts in persona Christi Capitis: . . .” (¶ 1548 Catechism of the Catholic Church).

“‘The divinely instituted ecclesiastical ministry is exercised in different degrees by those who even from ancient times have been called bishops, priests, and deacons.’ Catholic doctrine, expressed in the liturgy, the Magisterium, and the constant practice of the Church, recognizes that there are two degrees of ministerial participation in the priesthood of Christ: the episcopacy and the presbyterate. The diaconate is intended to help and serve them. For this reason the term sacerdos in current usage denotes bishops and priests but not deacons. Yet Catholic doctrine teaches that the degrees of priestly participation (episcopate and presbyterate) and the degree of service (diaconate) are all three conferred by a sacramental act called ‘ordination,’ that is, by the sacrament of Holy Orders: . . .” (¶ 1554 Catechism of the Catholic Church).

For more information about the Priesthood
or Dianconate, please click on the below link.
Vocations Office